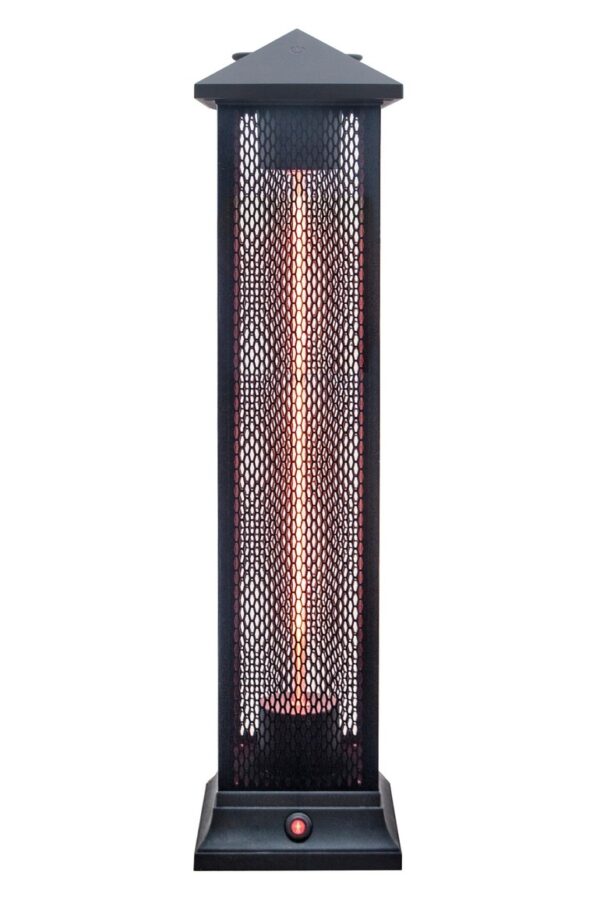 The stunning Kettler Kalos Universal Electric Lantern Heater 80cm is the perfect way to heat up your garden. Long-lasting bulbs. Contemporary dark grey colour. Mix and match with the other Kalos lanterns for stunning outdoor heating.

Seen it cheaper? Contact us with your enquiry and we will price match all genuine quotes! Terms and Conditions apply

The Kettler Kalos Lantern heaters are available as 50cm, 65cm or 80cm, so choose which one will suit your garden best, or mix and match to create a stunning outdoor look with these contemporary-style lanterns. The 80cm Lantern features a dark-grey colour boxing that surrounds the internal bulb, a mesh effect is created by the aluminium and steel that lets the heat and light out when turned on. The pyramid-shaped roof adds a traditional look, but is contrasted by the overall modern look. Its infra-red technology heats bodies rather than wasting energy on the air around you, making it efficient. There are no noises or fumes produced by this heater, and simply needs turning on by the red button on its base.

Send us a message below

There are no reviews yet.

£899.00
Add to basket
We use cookies on our website to give you the most relevant experience by remembering your preferences and repeat visits. By clicking “Accept”, you consent to the use of ALL the cookies.
Cookie settingsACCEPT
Manage consent

This website uses cookies to improve your experience while you navigate through the website. Out of these, the cookies that are categorized as necessary are stored on your browser as they are essential for the working of basic functionalities of the website. We also use third-party cookies that help us analyze and understand how you use this website. These cookies will be stored in your browser only with your consent. You also have the option to opt-out of these cookies. But opting out of some of these cookies may affect your browsing experience.
Necessary Always Enabled
Necessary cookies are absolutely essential for the website to function properly. These cookies ensure basic functionalities and security features of the website, anonymously.
Functional
Functional cookies help to perform certain functionalities like sharing the content of the website on social media platforms, collect feedbacks, and other third-party features.
Performance
Performance cookies are used to understand and analyze the key performance indexes of the website which helps in delivering a better user experience for the visitors.
Analytics
Analytical cookies are used to understand how visitors interact with the website. These cookies help provide information on metrics the number of visitors, bounce rate, traffic source, etc.
Advertisement
Advertisement cookies are used to provide visitors with relevant ads and marketing campaigns. These cookies track visitors across websites and collect information to provide customized ads.
Others
Other uncategorized cookies are those that are being analyzed and have not been classified into a category as yet.
SAVE & ACCEPT
Product has been added to your cart